FIRST ON FOX : A coalition of 22 states on Wednesday announced it has filed a court brief in support of a decision that struck down California's ban on “assault weapons” – which the liberal state has now appealed to the Ninth Circuit Court.

The coalition, led by Arizona, is urging the Ninth Circuit to uphold a lower court decision to strike down the three-decade ban on the state's definition of illegal military-style rifles. A federal judge overturned the ban with a permanent injunction earlier this month but has given the state 30 days to appeal — which it is doing.

California first restricted such weapons in 1989 and updated the law multiple times, defining the nebulous term “assault weapon” in such a way that the judge said there were 185,569 assault weapons in California alone.

The Republican states argued in the amicus brief that the law strikes at the Second Amendment by targeting guns that are used “by millions of law-abiding citizens for a myriad of lawful purposes.”

“California's law criminalizes mere possession of commonly-used arms even in the home for self-defense, and therefore the law strikes at the core of the Second Amendment,” the brief says . “Therefore, even under a balancing-approach, the Court should apply strict scrutiny. By outright banning constitutionally protected arms, California has failed to engage in any tailoring, let alone the narrow tailoring required to pass strict scrutiny.”

“Our Second Amendment is constantly under attack from out-of-touch Californians and ignorant special interest groups,” Arizona Attorney General Mark Brnovich said in a statement. “America must never abandon her law-abiding citizens and their fundamental right to defend themselves.” 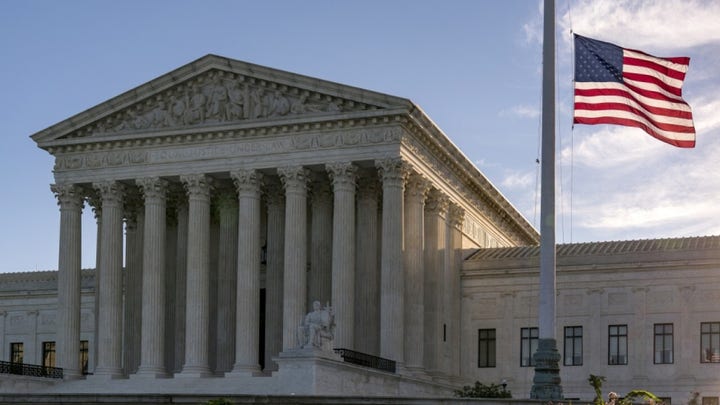 California officials argued that assault weapons are more dangerous than other firearms and are disproportionately used in crimes, mass shootings and against law enforcement, with more resulting casualties.

They also objected to U.S. District Judge Roger Benitez's description of the AR-15 rifle as a combination of home defense weapon and homeland defense equipment “like the Swiss army knife.”

“Equating firearms that have been used in many of the deadliest mass shootings in this country with Swiss Army knives has no basis in law or fact,” Attorney General Rob Bonta said, calling the ban an important tool in protecting the safety of Californians.

“California's assault weapons ban has saved lives, and we refuse to let these weapons of war back onto our streets,” Gov. Gavin Newsom said in a statement. “This ban was enacted after a shooting that took the lives of five schoolchildren and injured countless more, and my administration will do whatever it takes to continue protecting Californians and leading the nation in gun safety laws. This is a fight California will never back down from, period.”

The brief is one of a number of multistate briefs led by Arizona against what it sees as restrictive laws in both California and New Jersey.

Last month, 22 states, led by Arizona and Louisiana , urged the Ninth Circuit to again rule against California's attempt to ban high-capacity magazines after the court agreed to reconsider its decision to rule it unconstitutional.

The Associated Press contributed to this report.

Adam Shaw is a reporter covering U.S. and European politics for Fox News. He can be reached at [email protected]

California 'assault weapons' ban repeal should stay, 22 states urge Ninth Circuit have 1636 words, post on www.foxnews.com at June 16, 2021. This is cached page on USA Breaking News. If you want remove this page, please contact us.