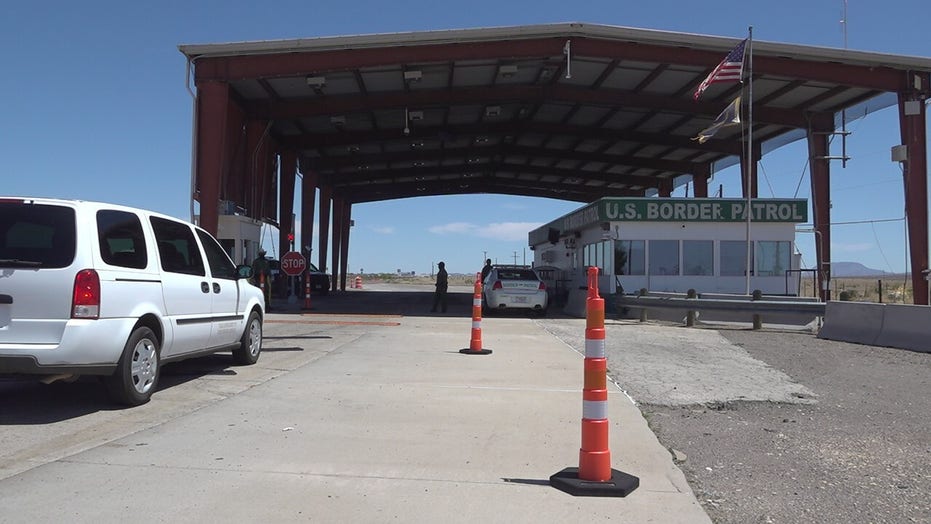 The Big Bend sector is seeing a sudden uptick in illegal border activity. They only have around 600 agents to cover the entire area, so to help combat the issue they’re using new technologies to give them the upper hand.

Marfa, Texas, is three hours east of El Paso. Home to less than 2,000 people the area hosts the U.S. Customs and Border Protection's Big Bend Sector headquarters. Border Patrol agents are working around the clock to stop illegal activity. This checkpoint is located just south of town off highway 67 onroute to the Presidio Port of Entry. (Stephanie Bennett/ Fox News)

Big Bend is one of CBP’s biggest sectors, covering 165,154 square miles over 77 Texas counties and the entire state of Oklahoma. It is responsible for patrolling 517 miles along the Rio Grande, which is the international boundary between the U.S. and Mexico.

Despite this, only about 600 border patrol agents are assigned here.

What may look like quiet farmland is anything but, and agents work round the clock to stop drugs, human trafficking and illegal crossings.

“We have increased numbers across the board, every day, so we’re doing the best we can to make apprehensions,” said Greg Davis, public affairs officer for the Big Bend Sector. “We’re very concerned for especially our small communities, where we had people coming in, that they may come across a rancher’s house and we’ve had instances where they’ve kicked in the doors”.

As the weather warms up, agents are performing more desert rescues too. The terrain around the Big Bend Sector can be very dangerous and deadly. Temperatures are already starting to soar and will only get worse in the summer months.

“The smugglers oftentimes will bring people across, these migrants have a lot of difficulties, have an issue, and get left behind,” Sean McGoffin, chief patrol agent for the Big Bend Sector, told Fox News. “It’s a very large area, very rugged, rough terrain, lightly populated throughout the entire area, so we do have a lot of areas that we cover.

“It’s often difficult to get to some of the areas that are right along the border, but we have a lot of agents here who are well versed and they’ve been here a long time and they know how to do the job along the border,” McGoffin said.

The Big Bend Sector is one of the biggest, covering 165,154 square miles in 77 Texas counties and the entire state of Oklahoma. The sector is responsible for patrolling 517 miles of river along the Rio Grande which is the international boundary between the U.S. and Mexico.

On Wednesday, the sector held its annual open house to display the equipment and assets used daily by Border Patrol agents, including helicopters, the K9 and horse patrols, and a variety of different vehicles.

There were two new truck-mounted roaming cameras, which will help them see more clearly on the go. The cameras can move in any direction and are equipped with night vision.

Two new truck-mounted roaming cameras will help agents see clearer 24/7 wherever they go. The cameras can move in any direction and are equipped with night vision. (Stephanie Bennett/Fox News)

“We have limited resources when it comes to agents, we do work very hard to ensure that we have capable dedicated personnel out there on the ground doing the job, and they do that valiantly every day,” said Davis.

He continued: “We make do with the resources we have in the best of our ability, we do use a lot of technology and it’s also very important I want to point out that we get a lot of tips from the public when they see something unusual on a highway or in a town, they will notify law enforcement and sometimes us directly.”

Migrants can use portable emergency distress towers to signal for help. The 20-foot solar-powered devices have instructions in English and Spanish so migrants who get lost in the desert can get help fast.

“We do have technology, this is technology that we didn’t used to have, so we’re getting some of that from our headquarters component and we’re really thankful for their investment in this sector,” said McGoffin. “We’re always going to need a little bit more manpower, but we’re adept in this sector of doing what we have to do to make things happen.”

The town of Marfa is located on U.S. Highway 67, the main road leading from the Presidio Port of Entry, one of the busiest in the sector.

The National Guard has stepped in to help, but there's only so much they're authorized to do. Nationwide U.S. Customs and Border Protection is hiring more officers and agents.

Stephanie Bennett joined Fox News in 2019 as a multimedia reporter based in Phoenix, Arizona.

CBP's Big Bend Sector harnesses tech to fight illegal border activity have 1839 words, post on www.foxnews.com at May 7, 2021. This is cached page on USA Breaking News. If you want remove this page, please contact us.