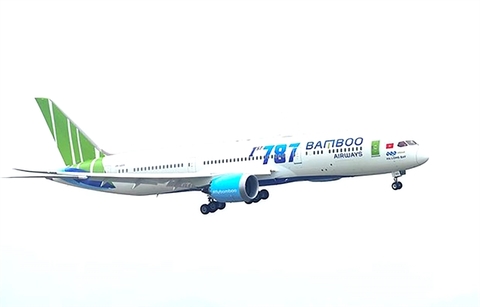 A Bamboo Airways flight. Bamboo Airways had received a permit from the US Department of Transportation to carry passengers and cargo to the country last year. — Photo courtesy of the airline

Bamboo Airways is finalising preparations to operate regular direct flights from HCM City to San Francisco and Los Angeles of the US, starting September 1, 2021.

Besides asking for permits, the carrier is training pilots and crew members, while finalising the preparation of other necessary conditions for the operation of the route.

Bamboo Airways received a permit from the US Department of Transportation to carry passengers and cargo to the country last year.

Viet Nam’s Ministry of Transport is also finalising procedures to designate Bamboo Airways to operate charter flights between Viet Nam and the US following a proposal made by the Civil Aviation Administration of Viet Nam at the end of April.

It will allow the private airline to carry passengers and goods from Viet Nam to the US and vice versa on charter flights upon approval by the Prime Minister and relevant agencies.

Passengers on these flights could be experts, foreign investors and Vietnamese citizens in the US wishing to return home.

Bamboo Airways Chairman Trinh Van Quyet said the airline expected to operate charter flights to the US from July.

The flights will be operated using long-haul Boeing 787-9 Dreamliner aircraft.

There are currently no non-stop routes between the two countries, and passengers have to transit in Hong Kong, the Republic of Korea or Taiwan, taking about 20 hours in all. A direct flight would shorten the travel time to 15-17 hours.

Americans are among the top foreign visitors to Viet Nam, with 687,226 arrivals in 2019, and an ethnic Vietnamese population of over 2.1 million in the US is also expected to be a steady source of travel demand.

Bamboo Airways gets ready to launch Viet Nam-US direct flights have 1201 words, post on bizhub.vn at May 9, 2021. This is cached page on USA Breaking News. If you want remove this page, please contact us.