Aaron David Miller is a senior fellow at the Carnegie Endowment for International Peace and author of ” The End of Greatness: Why America Can’t Have (and Doesn’t Want) Another Great President .” Miller was a Middle East negotiator in Democratic and Republican administrations. The opinions expressed in this commentary are those of the author; view more opinion articles on CNN.

(CNN) You can do quite a bit in 100 days — begin learning French; train your puppy; prepare for a 10K. But there’s one thing you can’t do: transform a cruel and unforgiving world.

Judging from the Biden administration’s first 100 days — an unrealistic and unrealizable metric by which to judge a presidency — there’s no danger of that happening.
I’ve worked for a half dozen administrations, both Republicans and Democrats, and have never seen one where foreign policy priorities seem so influenced by a domestic agenda and the politics that drive them.
Whether this pattern holds remains to be seen. But the prime directive of President Joe Biden so far is stunningly clear — aspire to be a transformative leader at home and a smart, careful one abroad.

Read More
It’s no exaggeration to assert that Biden faces the greatest challenge of national recovery of any President since Franklin D. Roosevelt without the benefit of a world war that would leave America stronger at home and abroad. Governing is about choosing, and Biden’s been crystal clear in laying out his top priorities : beating Covid, dealing with climate, restoring the economy and striving for racial equality. 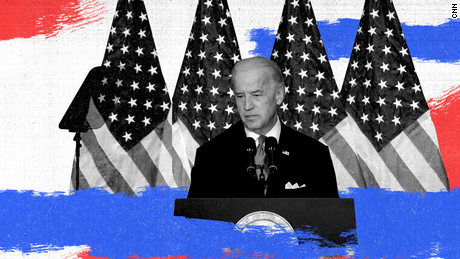 What Biden said he’d do as President to shift foreign policy 02:34
And if there were any doubt that for this administration foreign policy begins at home, in March, Secretary of State Antony Blinken laid out a foreign policy agenda — virtually infused with issues tethered to domestic priorities: immigration, renewing democracy, climate and the Covid-19 pandemic.
None of this means Biden plans to ignore America’s role in the world.
As someone who spent nearly 40 years as a senator and eight years as a vice president, Biden is acutely aware of the importance of not wasting political capital, especially with such narrow margins in the House and Senate, or roiling political waters at home that might undermine what he hopes will be a transformative domestic agenda.
He and his foreign policy team have also sought to frame US foreign policy as one designed to be relevant to the American people and are framing their approach as a foreign policy that benefits the middle class .
Biden set to make first foreign trip in June to UK and Belgium
Many of his foreign policy moves, such as recognizing the mass killings of Armenians from 1915 to 1923 as genocide , to toughening up policy toward China by calling out human rights violations over its persecution of the Uyghur Muslims and repression in Hong Kong , have been politically popular. And for those policies that aren’t well liked — at least in Congress — like rejoining the Iranian nuclear deal — he has proceeded quite cautiously — refusing to comply with Iran’s demand to lift sanctions and promising a longer and stronger accord after reentry into the Joint Comprehensive Plan of Action (JCPOA).
When Biden has been faced with political opposition, as he was when he appeared to back off his campaign promise to raise the cap on refugee admissions, he’s quickly retreated . And who would blame him? Since 1946, the average loss of a sitting president’s party in the first midterms is 25 seats . With a slim majority in the House and a one seat advantage in the Senate, Biden has little margin for bad political decisions.

Easy low-hanging fruit will do — for now

With one or two exceptions discussed below, Biden’s first 100 days in foreign policy has been understandably marked by caution, prudence and risk aversion.
What Biden and Blinken don’t want to tell Americans about Afghanistan
The world is a lot more complicated and less friendly than when Biden was Barack Obama’s vice president and surely since his tenure as chairman of the Senate Foreign Relations Committee. And given the President’s formidable domestic challenges, Biden has largely confined himself to repairing the damage his predecessor had done to America’s image and credibility — mostly through executive actions and orders.
This includes reversing the travel ban that primarily targeted mostly Muslim-majority countries; rejoining the World Health Organization and the Paris climate accord; and extending the New START treaty all represent an effort to rebuild and restore America’s faith in diplomacy, multilateralism and leadership in the world.
As president, Donald Trump’s first two foreign trips were to Saudi Arabia and Israel, which broke with presidential tradition ; in June, Biden will visit the UK to attend the G-7 and later Belgium for the NATO summit, signaling the importance of traditional American allies and interests.

Managing the world — not transforming it

The riskiest thing Biden has done to date is to announce a September 11 deadline for leaving Afghanistan — an issue in which the American public seems to have lost interest . And even here the main risk — a degrading of American counterterrorism capability to prevent an attack on the continental US — may take years to materialize, if at all.
He’s also been quite bold in identifying a set of US objectives to halve its greenhouse emissions by 2030 , a deadline that seems extremely difficult to meet.
Otherwise, an administration filled with aspiring internationalists and led by an experienced foreign policy president who talked during the campaign about putting America back at the head of the table, seem to have a pretty sober and realistic view of the challenges they face in a cruel and unforgiving world. Issues with Russia, China, and Iran are to be managed if possible, not somehow neatly wrapped up and placed in the win column. Ditto with seemingly intractable problems like North Korea, Syria and the Israeli-Palestinian conflict.
Get our free weekly newsletter

After the unhappy experiences in Afghanistan and Iraq, nation-building abroad is to be avoided at all costs — a trend line that now runs through three administrations (Obama, Trump and Biden).
But then governing is about choosing. Perhaps the world that awaits Joe Biden will draw him into some major foreign policy crisis. His early moves abroad, however, reflect the instincts of a man focused on matters domestic.
He knows that the success of his presidency — and perhaps the future of the republic — hangs not on overcoming challenges abroad but on those here at home. And by the looks of things, the American people couldn’t agree more.

The main idea behind Biden's global strategy have 2018 words, post on edition.cnn.com at April 28, 2021. This is cached page on USA Breaking News. If you want remove this page, please contact us.