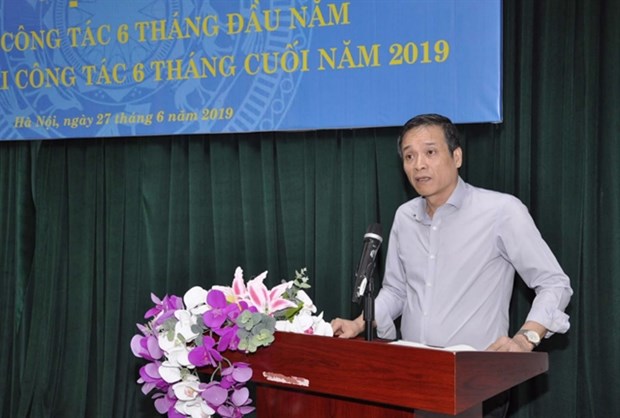 During the June 27 conference to review the industry's performance in the first six months of 2019 and implement tasks for the second half of 2019 held in Hanoi, Pham Thu Phuong, ISA's deputy director, said besides maintaining a high growth rate, the financial status of insurance firms also improved in the period with total assets rising by 19.01 percent to 423.42 trillion VND.

According to the ISA, the insurance industry is targeting a growth rate of 20 percent this year.

To meet the target, in the remaining months of the year, ISA's general director Phung Ngoc Khanh said the ISA would continue to improve mechanisms and policies towards focusing on restructuring to make the insurance market develop transparently, safely and efficiently as well as in line with international standards.

"In particular, the ISA will focus all resources to complete the revised Law on Insurance Business as well as regulations to guide the implementation of the law according to Vietnam's commitments in the Comprehensive and Progressive Agreement for Trans-Pacific Partnership (CPTPP) as well as other free trade agreements that the country signed," Khanh said.

The ISA will also draft policies on micro insurance, compulsory insurance for civil liability of motor vehicle owners, disaster risk insurance and public property insurance to submit them to the Government for approval.

In addition, the ISA will study to issue policies with the aim of encouraging the development of new products, especially those in accordance with Industry 4.0, as well as social welfare products.

The fast-growing domestic insurance market should thrive thanks to rising living standards and a high gross domestic product (GDP) growth of more than 6 percent annually over the next three years, experts said.

The growth potential is great as the country has one of the world's lowest life insurance penetration levels at less than 1 percent of GDP. The average insurance premium in Vietnam stands at 30 USD, much lower than the global average of 595 USD and Southeast Asia's average of 74 USD.

Vietnam's insurance industry keeps thriving in first half of 2019 have 1524 words, post on en.vietnamplus.vn at June 29, 2019. This is cached page on USA Breaking News. If you want remove this page, please contact us.